Terrifying Tales for 2011 by Shana Hammaker 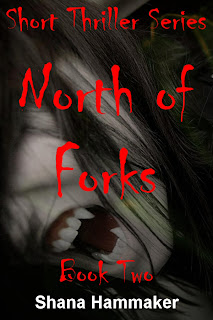 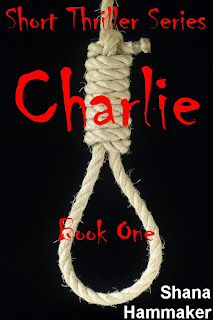 
My name is Shana Hammaker, and this year I have given myself a year-long literary challenge I like to call Twelve Terrifying Tales for 2011.  The idea? I write (and publish on the Kindle, and hopefully soon also the Nook) a different short thriller every month for the whole year.
Why write short stories?:
Why am I doing this? Because I love to read and write thrillers. And because like you, I agree that ereaders are the ideal vehicle for resurrecting the short story as a viable literary form. As a lifelong avid reader I understand that sometimes the greatest thing in the world is to fall into an epic novel and live there for awhile.  But I also know that sometimes it's better, or simply more fun, to dip your toes into something short and brutal.
About January and February's tales of horror:
Charlie
When Alex fantasized about buying her dream home, she didn’t imagine it would include a regiment of reappearing corpses.

But that’s exactly what she got.

In CHARLIE, Alex Hutchinson buys the home she hopes she and her fiancé will start a family in. But unfortunately for her, family bliss isn’t in the cards. Instead she gets Charlie, the corpse who won’t stay away.

What’s a girl to do? Call the cops? Bury the bothersome stiff in the basement? Run away to Spain? Alex tries a little of everything as her rotting, unwanted visitor pops in with ever-increasing frequency and the fabric of her once-tidy life unravels around her.

CHARLIE is Book One of Shana Hammaker's monthly serial
Twelve Terrifying Tales for 2011.

And before you even ask, NO she's not one of THOSE Cullens. But try telling that to the legions of lost bloodsuckers who wandered into her hometown of Beaver because they missed the exit for Forks. Vampires can be so stupid.

But soon another monster came to town that made the star struck vampires look like cute defenseless puppies. I'm talking about zombies. The zombie plague swept into, and quickly overwhelmed, Sara’s small town. Within days normal life ended. Within weeks there were more ghouls than humans. Finally, a mere three months after the start of the plague, Sara and her friend Jessie Sparks were the only live people left in their corner of Washington.

Or so they thought. But then a handsome stranger wandered into town, and everything Sara and Jessie thought they knew about life in post-zombie-apocalypse Beaver turned upside down.