Showing posts from February, 2016
Show all

Canceling Out the Distractions

February 24, 2016
My new favorite thing is noise canceling headphones.  I've had a pair for years but lately I've been using them to write.  Game changer! I'm generally very focused once I get into a focusing zone.  However, everything about my brain requires long stretches of start up/shut down.  It takes me at least an hour to fully wake up in the morning (and that's with coffee) and when I go to sleep it's a several hour long process.  The same goes for focusing.  I can work for long stretches of time but calming down enough to actually get into the focusing zone can require some work. So I took the advice of a friend and tried headphones with music.  I made myself a playlist of classic music--no words!  It took some getting used to.  I'm a musician so my first instinct when I hear music is to focus on it.  But I kept the volume turned down low and I made a point of having the music on only when I'm writing .  If I turned away to look at my phone or check my email, I p
Post a Comment
Read more 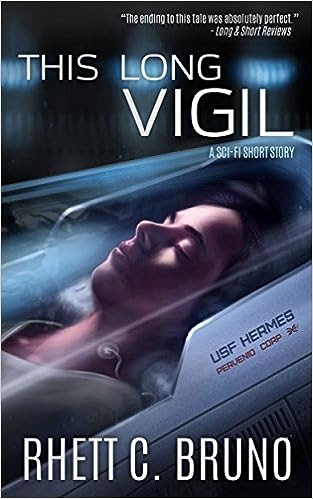 Summary:   After twenty five years serving as the lone human Monitor of the Interstellar Ark, Hermes, Orion is scheduled to be placed back in his hibernation chamber with the other members of the crew. Knowing that he will die there and be replaced before the ship’s voyage is over, he decides that he won’t accept that fate. Whatever it takes he will escape Hermes and see space again, even if it means defying the regulations of his only friend -- the ship-wide artificial intelligence known as Dan. Review: Turning fifty is a mental milestone for most people.  But it's a bit more than that for Bruno's main character, Dan.  Fifty marks the end of his life. This is a phenomenal short story.  Bruno cleverly touches on a number of everyday life and aging issues in a very short space of time.  The setting of the space ark traveling for 200 years to the next closest inhabited planet was brilliant.  Dan literally has nowhere he can go but forward, a perfect metaphor fo
Post a Comment
Read more
More posts