Showing posts from October, 2014
Show all

October 29, 2014
I have now been published for four years. Sweet Alaskan asparagus tips!  That's, like, how long I was in college. Did I think I would make it this far?  Who knows.  But if there was a theme to this past year I would say that it was proving to myself I'm in it for the long haul. When I first started this whole self-publishing thing I had no idea what I was getting myself into.  To be honest, I thought I could just throw the stories I had already written onto the Internet and make money off them.  That, as it turns out, is not how this business works.  Making money off of your writing requires time, effort and patience. I feel that I do deserve a pat on the back because I did stick with it even after the harsh reality started to sink in.  After all, blogs are really about giving oneself pats on the back. So here I am... four years later.  I wouldn't say that I've struck it rich yet.  But I am making a very small but steady side income.  That's something, I s
Post a Comment
Read more

October 15, 2014
I've been considering a publisher name.  As in, instead of not listing any publisher at all I have fictitious name listed. I realize that most people don't even think to look at a publisher name.  But it seems like an easy way to organize my books.  I also think it looks a little more professional should someone actually scroll down to look...? I'm worried, however, that I am just creating pointless work for myself that will just cut into my writing time.  Establishing a separate publisher name would mean hours of redoing copyright pages and republishing stories.  Will this affect sales at all?  Probably not.
Post a Comment
Read more

Review of "My Card," a short story by Matthew Allred 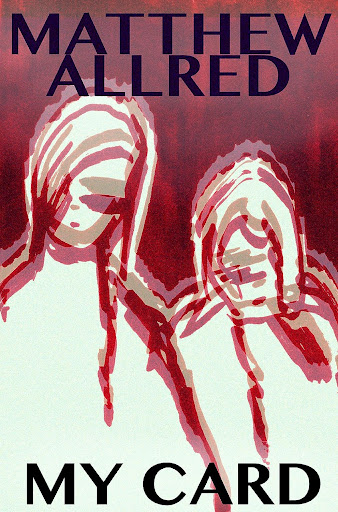 Summary: A bizarre relationship between two young men proves more dangerous and bloody than anyone would have guessed. From the outside looking in, Christopher Card and Stephan Maccabee are close friends--always at each other's sides--but the truth is much more brutal and horrifying. Review: A simply enthralling short story.  The focus centers around a (schizophrenic?) high school boy's inner struggle with himself.   This story was the perfect balance of "psychology" and "horror" without becoming overly gruesome.  To me the brilliance of this story was in how the reader's perception of the characters change.  It starts out like they're normal friends.  Then you wonder if there's something else going on between them.  Then the horror of what they're about to do really hits.  I actually felt nervous for the victim! This is an excellent piece of horror fiction and well with picking up a copy.   4.5/5 stars Reviewed by
2 comments
Read more
More posts