Concept behind Doctor Fleischer, a short story by Alain Gomez 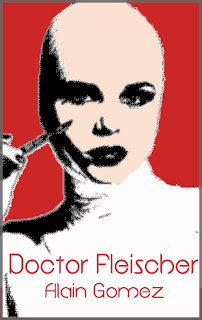 Doctor Fleischer is part two of my Space Hotel Series.  I originally wrote Celebrity Space (part one) to be a standalone story.  I had never written sci-fi before, I was still experimenting with short stories... I had no idea what I was doing, basically.  But after I finished Celebrity Space, I really liked how some of the characters turned out; particularly the doctor.
That's when I got the idea to make a series.  Every story in the Space Hotel Series is standalone.  They all make sense plot-wise by themselves.  But they all revolve around the same "concept" of time and location.  So, combined, the reader will get more and more of an idea about how far the aliens have infiltrated and what their goals are.  At least, that's what I'm hoping to achieve.
I have at least three more stories planned for this series.  Hotel Moonwalk will be the next one and will be released very soon (if not already by the time this blog posts).  The other two I already have outlined and will begin work on them shortly.
alain gomez