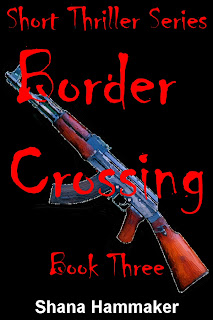 Mike was a San Diego native with a winning smile and a personal charm both politicians and gigolos would envy. But Mike wasn't any kind of whore. He preferred the money and independence afforded him by smuggling guns across the border to Mexico's Sinaloa Cartel.

With that independence Mike pursued his true love: finding girls for his doll collection.

At the beginning of BORDER CROSSING we meet Julie, a feisty blonde who was by far Mike's favorite doll. Julie vowed to take revenge on Mike, and despite the fact that when the story opens she was nothing but a decapitated head hidden in Mike's trunk, Julie will get her revenge.

WARNING: BORDER CROSSING is a gruesome paranormal revenge thriller that will appeal to people who believe the sword beats the hell out of the pen in a real-world fight. If you prefer to solve your differences civilly, over a cup of tea perhaps, you might not enjoy Julie's bloody triumph that is the finale of BORDER CROSSING.
Buy Now:
Border Crossing on Amazon
Shana Hammaker short story project