Review of "Take One at Bedtime," short story collection by Jenny Twist 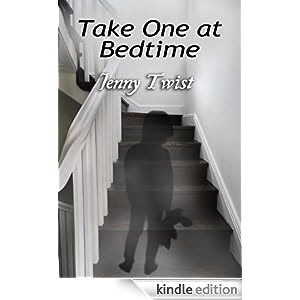 Summary:
Nobody ever goes upstairs in Margaret's house. So what is making the strange thumping noises up there? And why is there a toy rabbit under the kitchen table?

Margaret's Ghost is just one of a collection of short stories consisting mainly of horror and science fiction, ranging from a classic gothic tale – Jack Trevellyn – to the Wyndhamesque Victim of Fortune, and the modern Waiting for Daddy, with its spine-chilling twist.

There is also the occasional excursion into romance with A Castle in Spain and Jess's Girl.
But most of these tales take you to a place which is not quite as it seems.

It's bedtime now. Time to go upstairs. Time to take a look. Just one look.

WARNING: Do not exceed the stated dose.
Review:
This is a rather large collection of short stories.  Though the collection itself is big, most of the titles do not exceed 2,000 words.
Aside from the possibility that each little tale could easily be read before bed as the author suggested, there doesn't seem to be any connecting force between the stories.  They range all over the place from horror, to sci-fi (esque), to romance.  So aside from just having a collection to grab and pass a few minutes with, I was slightly confused over the author's target audience.
The individual stories are unassuming.  Regardless of the genre, they always end up being light and easy to read.  It would seem that there are one or two themes the author likes to experiment with.  Fidelity in marriage crops up several times as does the idea of parallel universes.  Though the summary describes the collection as containing "spine-chilling" tales, I didn't really get that sense.  None of the stories really have a spook factor to them.  Entertaining, yes.  Creepy, no.
I would best describe this collection as containing a little something for everyone.  It's fun and well-written.  Though I actually wished at several points the author had broken down her work in to smaller, more focused collections.  I think that that would have helped enhance the mood if every story was creepy or romantic.
3/5 stars
Reviewed by Alain Gomez
Buy this collection on Amazon US.
3 stars Jenny Twist reviews