Concept behind "The Hall of Immortals" by Alain Gomez 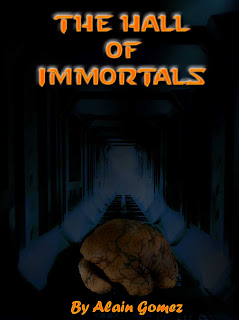 The fifth and final installment to my Space Hotel Series.  It's about a brain.  In a jar.  I know I'm strange but I just find brains in jars to be so classic and creepy.  Though I never say the character's name outright, this story does follow the fate of the doctor I introduced in part one, Celebrity Space.
The Hall of Immortals is a little different from the others in the series.  It's more focused on the psychological rather than the action.  It kind of had to be.  What else can a brain do?  But it made for a very interesting writing project.  Since the brain is denied her senses, what defines her reality?
Though the story approach was different, I think The Hall of Immortals keeps with the style of the whole series.  As with the other stories, it is standalone but also interconnected.  It also has that same kind of dark twist at the end.
alain gomez