Bloodstains On The Wall by Mike Dennis 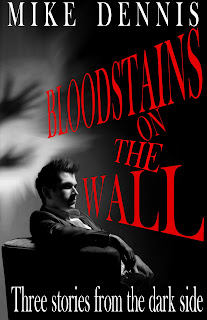 About Mike Dennis:
After thirty years as a professional musician (piano), Mike Dennis left Key West and moved to Las Vegas to become a professional poker player. In November 2010, his noir novel, The Take, was released by L&L Dreamspell. It's a story of human desperation, set in Houston and New Orleans.  In addition, Mike has had short stories published in A Twist Of Noir, Mysterical e, Slow Trains, and the 2009 Wizards Of Words Anthology.  A collection of three short stories from the dark side, Bloodstains On The Wall, is now available on Amazon Kindle.
Mike's opinion of the short story genre:
With the explosion of digital publishing, short stories now have a vast, new outlet. The rise of e-readers, especially among younger people, will provide the market for these stories, and as long as they are priced correctly and are well-written, new stories will be joined with new readers.
Summary of this work:
From the other side of the human condition comes this collection of noir tales by Mike Dennis.
1. FULLY LOADED
It's 1984 and Biloxi, Mississippi has seen better days. Sherry Lamar, used car saleswoman extraordinaire, is feeling the pinch. Then one day, a stranger walks onto her small car lot and ushers her into a world of steamy sex and murder.
2. THE DEVIL DRIVES A BIG MERCEDES
A seven-year-old boy is playing with his two younger sisters when a minor accident occurs. One of the sisters is to blame, but she blames the boy and their mother believes her, punishing the boy. This starts him on a downward spiral into self-doubt and later, depravity, that will last his entire life.
3. BLOCK
A famous crime fiction novelist thinks the current book she's working on will revive her sagging fortunes. Halfway through it, however, she develops writer's block and is unable to continue her story, until a mysterious early-morning phone caller claims to have the answers.
Buy now:
Bloodstains on the Wall on Amazon
Bloodstains on the Wall on Smashwords
Mike Dennis short story project