Review of "A Jalapeno for the Vampire" by Daniel Roberts 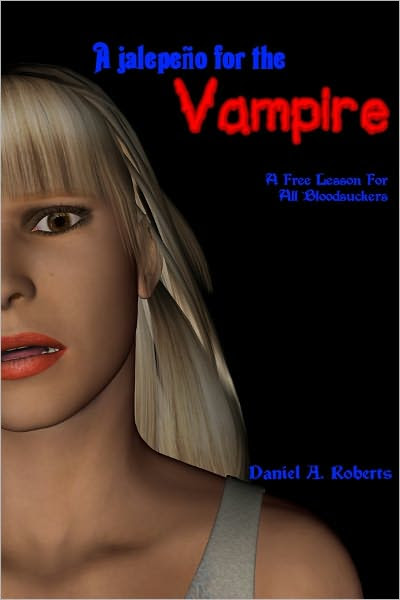 Summary:
Kidnapped and thrown into the lair of a deadly vampire, Susan Smith fights through the terror of her plight to survive. Will the evil creature get her in the end or will she find a way to defeat him?

Review:
I was a bit reluctant when I was given a vampire story to review. Veins make me queasy and I don’t like anything touching my neck, so it comes as no surprise that the recent trend of “sexy vampires” holds no appeal for me. In my mind, vampires will always be gross and scary.

Fortunately for me, Roberts’ story “A Jalapeño For The Vampire,” is a modern nod to the good old days when vampires were terrifying. The story follows the capture and imprisonment of a young girl, named Susan, who is doomed to be a vampire’s snack. Though Roberts does an excellent job of crafting interesting characters, setting the scene and building suspense, Susan’s dialogue is sometimes forced. Instead of sounding like a spunky young girl, she sounds like a grown man trying to sound like a spunky young girl. In this aspect, Roberts has some growing to do as a writer.

The plot is intriguing, and the fact that almost the entire story takes place in one room but remains interesting is impressive. The mental game of cat and mouse played by Susan and the vampire is entertaining, and Susan’s refusal to go down without a fight ads drama and suspense to a seemingly hopeless situation.

The conclusion is well conceived, though hardly unexpected. With all the hints Roberts drops along the way it doesn’t take a rocket scientist to put two and two together and figure out her plan. The ending may not be a surprise, but the story remains a good concept and the writing skillful enough to make it an enjoyable read.