Review of "Dramatic Solution & The Allergy Factor" by Robert Collins 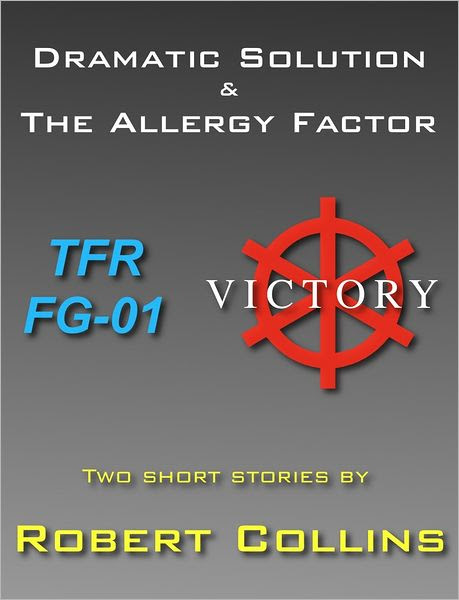 Dramatic Solution: The Terran Federal Republic frigate Victory is escorting colonists to their new home world. Upon arrival they find a pirate ship orbiting the planet. Dealing the the pirates is easy. How can the crew prevent the pirates’ leader from finding his missing ship?
First published in “Just Because,” September 1998.

The Allergy Factor: There’s trouble on the colony world Vliets between settlers and a mining company. Captain Jason Ayers and the Victory are sent to resolve the dispute. One of his crew falls ill from a sip of beer. Could the explanation point to a solution?
First published in “Hadrosaur Tales,” Volume 17, 2003.

Review:
This collection is composed of two stories, “Dramatic Solution” and “The Allergy Factor,” both part of a series entitled “Frigate Victory.” The sci-fi shorts follow the adventures of the crew on the frigate Victory, particularly Lieutenant Shannon Fournier and Captain Jason Ayers. The episode-like format, as well as the setting and plots, are strongly reminiscent of the Star Trek series, with the crew serving as escort, bodyguard and peacemaker for individuals seeking to expand the colonization of space. This lends an air of familiarity to the stories, yet they remain fresh and interesting in their own right.

The first story in the collection, “Dramatic Solution,” is a bit overwhelming initially, as Collins introduces a full cast of characters within the first paragraph, making it hard to keep track of who is who. However, Collins manages to make the characters, particularly Fournier, both realistic and intriguing. The author has a good thing going with this series, and I hope to read more “episodes” in the future.

Interestingly, Collins provides almost no backstory for either the characters or their mandate on Victory. Normally this would bother me, as the right balance of plot and background information can add depth to short stories. However, in this case backstory is rendered unnecessary by Collins’ skillful writing and would, in fact, drag down both pace and plot.

If you can get past the initial character bombardment, the Frigate Victory series is well worth reading.