May 11, 2011
Her name was Aidia and she never slept.
The grey mists seeped down from the hills and covered her in a damp shroud as she walked. Her grey hair was pulled back and her steel eyes stared straight ahead. She stepped out onto the lake, the water clinging to the soles of her boots. Ice crystals formed and slivered outward from beneath her feet. As cold as midwinter she moved toward the island.
Aidia looked up at the ruby walls of the keep and for a moment trembled. She gripped the icicle hanging from its silk cord around her neck and felt cold determination replace her fears. She set foot onto the island and walked through the open gate. It struck her how much easier it was to enter this time than before, but this time she had no intention of stealing anything away and she guessed that she was expected.
The carved double doors of the hall swung open and a wave of heat rushed out to bid her welcome. Arhidfel did not.
He stood at the end of the hall near the great hearth in robes the shimmered with all the colors of flames. His blood red hair hung to his waist and as she drew near she saw satisfaction flash through his molten eyes.
“Aidia,” he said. “You return.” He gestured at the icicle hanging around her neck. “I could use that back. It is difficult to be a fire and ice mage without ice.” His mild voice was betrayed by the tension in his body.
Aidia stared up at him for a moment and then looked into the hearth. She couldn’t feel the heat from the fire, only currents of air. She closed her eyes and wondered what has possessed her years ago to cut the icicle from his neck. She could have taken anything to prove she’d been there and still won her place in the hidden guild. Cutting the ice-power’s vessel from Arhidfel’s throat had been nothing but arrogant stupidity. But she didn’t feel she’d deserved his curse.
“I do not sleep,” she said and opened her eyes, “nor do I dream.”
“You do not carry mage blood.” He shrugged contemptuously. “The ice-power does not belong to you. I knew you’d return someday.”
“I was wrong to take it,” she whispered, unable to meet his gaze again. “Please, remove this curse.”
He held out his hand expectantly. Aidia lifted the cord over her head and held the icicle in her hand.
“Will this end it? Will I sleep?”
“I will see what I can do,” he said. “Give it to me.”
Aidia looked into his eyes then and despaired. She was no longer that young, inexperienced girl eager to believe. His hunger for the power lay naked in his eyes and she saw the lie for what it was.
She tried to recall how it had felt to hold the ice-power for the first time and couldn’t. She’d been too terrified, too elated and now she was too chilled, too hollow. She realized suddenly why he’d never come after her, why he’d waited all these years for her return.
The ice-power protected her from his fire magic, as long as she held it, she would be safe from him. There was only one way to walk out of this hall.
Arhidfel leaned forward in anticipation and the top of his robe slipped open, revealing the fire gem embedded in his breast bone. Aidia hesitated for the space of a breath, weighing death and a life without dreams. Then she shifted her grip on the icicle and lunged.
She stabbed the icicle into the fire gem. The force plunged both gems deep into his chest. He gasped and gurgled, falling backward into the hearth.
Golden eyes stared up at her in shock.
“I didn’t deserve it,” she said, her smile small and cold.
“You are still cursed; you’ve carried it too long. Nothing… changes.” Arhidfel choked, blood running out his mouth.
“I know,” she murmured, “I know.”
Aidia shivered as his body burst into a thousands pieces of ash and ice. Then, cold as ever and hollow with a grief she could not name, she walked from the hall and back into a world that held no dreams.
* * * * *

Review of "Smite Me, Oh Dark One," short story by Steve Thomas

Summary: Acerbus hates his job. While he is content to watch and study the mortal races, the other gods constantly look for reasons to destroy their newly-created world. When they finally find an excuse, they command Acerbus to become the Smiter, destroyer of all creation. Armed with nothing but spite and goblins, Acerbus decides that there is only one way to ensure his own failure and save the world: by becoming an Evil Overlord. Review: This is an absolutely delightful story.  Thomas has such a fun style of writing!  "Smite Me" was a perfect blend of whimsy, humor and thought-provoking ideas.  I frequently found myself laughing out loud as I read though this story.  The way Acerbus interacts with his fellow gods is priceless. While this story remains engaging throughout, I found myself a tad confused in the middle.  It was unclear to me why any of the gods, including our main character, would obey the main god, Lux.  Acerbus constantly seems torn between obeying
Read more

The Sagas of Surgard the Traveler by Robert Collins 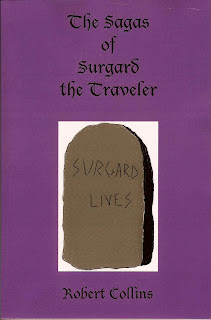 Summary of "The Sagas of Surgard The Traveler": Foolish giants. Suspicious savages. Duplicitous wizards. Monsters with attorneys. It's all in a day's work for Surgard the Traveler!  The collection has 13 short stories, all fantasy and all humor. Why he feels anyone should read any of his short stories: We all need a good laugh from time to time.  There's lots to poke fun at in the genres of fantasy and myth.  An inspiration for one of the stories was a satirical RPG character Steve Jackson invented called "Conman the Barbarian."  Another was inspired by one of the "Hitch-Hiker's Guide" books.  In another I got to reference "What's Opera, Doc."  They were loads of fun to write; I hope readers enjoy them as much. Buy now: The Sagas of Surgard the Traveler on Amazon The Sagas of Surgard the Traveler on Smashwords
Read more