Review of "A Smile of Fortune," a short story by Adam Kisiel 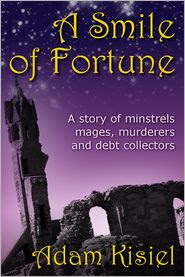 Summary:
A story of minstrels, mages, murderers and debt collectors!

Carefree bard Crispin coming back home from his parsimonious uncle's funeral does not expect that soon he will be mixed up in a murky intrigue involving magic, fear and a dwarf working as a debt-collector.

Review:
This story was scattered.  It begins with a promising start by presenting a protagonist in the form of Crispin the Bard.  There is an engaging opening scene that involves Crispin meeting a halfling named Bibble.  This was pretty much the only part of the story that was really clear to me.

Crispin and Bibble travel to a city together and the story takes off... in every direction.  Bibble is arrested and then we never hear from him again.  Apparently they weren't the BFFs the author lead us to believe?  New characters start to be introduced with reckless abandon.  Every other paragraph Crispin is doing something different.  First he's in prison, then he's with his wizard friend, then he's getting drunk at a brothel... I wish I could tell you that this all leads somewhere but it doesn't.  Other than a piece of jewelry he happened to be wearing, Crispin actually has almost nothing to do with the final action sequence.

On top of all of this was a jarring style of writing.  Kisiel regularly switches off between using "Old English" style phrases such as: "Hail to you!" And then throwing in lines like "The booze turned out quite tasty but was kind of a shot."  Or even "He was hanging around the Mages' Guild for two hours."

I think the idea for a series of short stories following a bard is a good one.  There's lots of potential for fun adventure.  In the end, it seems as if Kisiel just has too many ideas going on and then trying to pack them all into too small a space.

Buy this short story on Amazon or B&N.