Review of "Souls, Inc.," a short story by Shana Hammaker 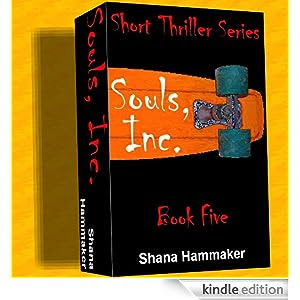 Summary:
Being dead isn’t a thrill ride, but Patty Sullivan figures she could have done a lot worse for her afterlife.

After all, she’s got company with her in Purgatory: Jimmy, AKA the Grim Reaper; Brian, an adorable little dead boy; and Nexie, Jimmy’s feline familiar. And there’s never a dull day in Purgatory, what with the constant travelling and never ending parade of soul extractions.

But there’s something missing in Patty’s afterlife—meaning.

Patty can’t remember why she died. She can’t really remember anything at all about herself or her existence before Purgatory. And she knows there’s something important buried in her past, something that pertains to her death…but what?

And Jimmy, that snarky bastard, won’t tell Patty anything. He says she has all the answers inside her already, and all she has to do to discover them is “open her soul to the truth,” whatever that means.

Patty’s not impressed by Jimmy’s psychobabble but she’s determined to learn the truth about herself.

Review:
This story is written as the journal of seventeen year old Patty, a ghost stuck in purgatory who is trying to remember who she was and how she died before moving fully into the afterlife. The story is both original and well executed. Patty comes across as a believable seventeen year old, and each of the three main characters is well developed in their own right.

This reviewer particularly liked the journal entry structure of the piece, as it allowed Hammaker to jump from event to event with ease, allowing the story to progress without becoming bogged down. The author’s writing is succinct and the dialogue both believable and clever, allowing her to keep the overall tone of the piece light despite it’s focus on death.

The story is enjoyable enough that I found myself disappointed when it was over. In the end, Hammaker resolves the mystery of Patty’s death, thereby nixing all possibility of future Souls, Inc. installments. I would have enjoyed this story more if it were part of a serial, with each installment adding another piece to the mystery. As it is now, the ending feels too sudden and, as a result, heavy given the lightness of the rest of the piece.

Buy this story on Amazon US.
3.5 stars reviews Shana Hammaker