Concept behind "Hotel Moonwalk," a short story by Alain Gomez 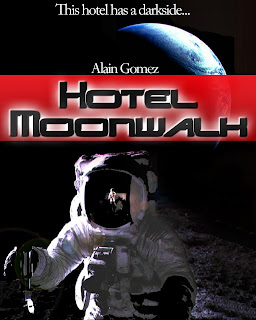 Hotel Moonwalk is part three of my Space Hotel Series.  Again, the idea behind this series was to explore different points of view all revolving around the same concept of place and time.  Even though all the stories revolve around this space hotel that I introduced, Hotel Moonwalk actually takes place on the hotel.
This story follows a celebrity athlete as his vacation turns into a trip from hell.  In part one and part two of this series, most of the alien/human interaction could best be described as abduction.  Some people go missing but nothing we have to be worried about.  What I liked about this story in particular is that the reader is really starting to get the sense that the aliens are not just observing the human population, they're infiltrating.
I'm planning on the Space Hotel Series to consist of five parts.  I feel that Hotel Moonwalk is the perfect bridge as I introduce the rest of the stories from from the alien's perspective.
alain gomez