Review of "Tell Us Everything," a single story in a collection by Randy Attwood 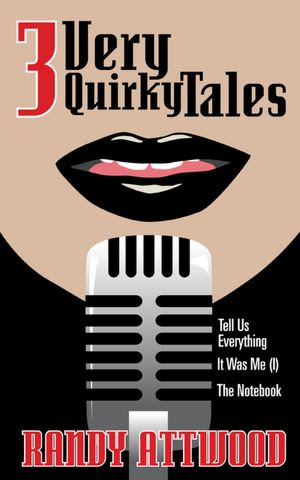 In Tell Us Everything a Goth girl discovers how to plug herself into the world of the real and tell its secrets, much to the dismay of those who populate the world.

Timothy Thomas, driving home from work, looks at the driver in the next car and sees himself, not the person he is today, but the person he was 30 years ago. Are there start overs? In It Was Me (I) Timothy is about to find out.

The Notebook: When Jeremy stops by the house were he had an apartment when he was a college student and asks if he might look in the attic to see if a notebook he left there still exists, Sarah lets him in. They both discover truths they had rather not known.

Review:
What an absolutely delightful piece!  What started out for me as a "what the heck..." story ended up unfolding into a genuine chuckle of a conclusion.

There was quite a lot to take at the beginning of "Tell Us Everything."  It started mid-action and had a plethora of names/characters (for a short story).  The first few opening paragraphs really did nothing to alleviate this confusion as there was no one line that gives the reader a clear idea as to what is going on.   Add to that the fact that many of the characters had nicknames that were used interchangably.

But Attwood's story is definitely worth toughing out to the end.  Eventually you start to sort out the characters and their relationship to each other.  The nagging suspicion that the town of "Peculiar" is just a little off becomes fully confirmed.

What actually made this story so charming for me is that there really isn't a "point" to it.  It falls in that short story grey area where you really couldn't classify it under any one genre.  It wouldn't do it justice. It's a funny story for a story's sake.

All three pieces in this collection are just as strong.  So if you are a fan of the whimsical short story, I would highly recommend picking up this work.

Buy this collection on Amazon or B&N.