Happy Publishing Birthday To Me!

October 03, 2012
Yes, that's right.  I just sang a birthday song TO ME.  Muahaha!  Now before you roll your eyes, I only do these basking in the glow of my own glory and personal growth posts once a year.  So you're just going to have to deal because I like them and it's a way for me to journal my uphill progress.

It's hard to believe another year has already gone by!  It seems like I was just writing my one year anniversary post.   For nostalgic purposes I went back and reread it and I thought, "Wow! A lot has happened since then!"

If I remember correctly, this time last year I was feeling like I was by no means achieving financial success but I at least had a handle on what it would take to make it in the self-publishing industry.  Yes, I could spend gobs of money and have better everything (covers, ads, writing, etc...) but at least I knew what it would take.  And then going, "Ok, this isn't so bad.  I can do this."

So while at one year I was staring at the hill of self-publishing, by this second year I feel like I've found a comfortable hiking pace. Yes, I come across obstacles but I just feel more... settled.  Like it's no longer a matter of if I reach the top it's more just when.  And by top I mean making a steady side income.  Not international public fame.

I have no idea where this gigantic hiking metaphor came from but it seems to be working so far.  Perhaps I've been playing too much disc golf?

As milestone markers,  I would say three big things happened to me in this past year:


1)  I started getting concept art done for my science fiction serial blog, Muzik Chronicles.  Yes, this costs me more money than it makes me right now but I don't care.  Call me an optimist, but I really do think that this blog will pay off in the long run.  For one thing, I love writing it.  It's just so much fun!  And for another thing, every time I get new art for it, it just makes me all excited all over again.  Who wouldn't be excited when you see the ideas floating around in your head turn to life in front of you? 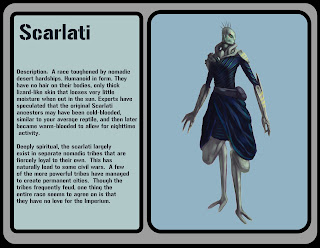 Way to go, Andrew de Guzman.  Your artistic skills have single-handedly managed to take this blog to the next level.

2)  I diversified.  I made sure that all of my titles were in the Smashwords Premium Catalog.  I also branched out in genre and started several new pen names to help direct traffic to the specific genres.  I found this really helped with sales.

Making money with short stories takes both quality and quantity.  You're banking on the fact that one reader is going to buy all 100 stories not 100 different readers buying one story.  So I decided that it would make sense to try and cast my net as far as possible.

I know that some people are really anti-pen names.  But I do like them quite a bit.  I find that different pen names liberates me as a writer.  I'm no longer stressed about writing Annie Tuner western romances because I'm worried that the weird Alain Gomez scifi crowd will think it's cheesy.

Diversification also helped me to figure out what sells and what doesn't.  Not that this holds me back as a writer or that I'm forcing myself to write things I'm not interested in.  It's not that at all.  But since I am in the business of writing, trying to get my monthly earnings up to a respectable amount is not an unreasonable goal.  If nothing else, the income is needed to cover the costs of self-publishing.

At this stage in the game I have literally dozens of story ideas that I want to write.  But my time is limited.  So lately I've been choosing writing the projects that will probably sell more consistently.

Which actually leads me to...

3)  I turned my writing from a hobby into a business.  In reality, not much really changed.  But psychologically this was a big milestone for me.  All my book royalties are now being deposited into my business checking account.  So I am officially paying bills (ok, maybe it's like one bill, but hey!) with writing income.

I also streamlined my writing time.  I went from writing whenever I felt like it (read: whenever I was bored) to actually having scheduled writing times.  I love it!  I at first was worried that it would give me a permanent case of writer's block but actually the opposite happened.  It's now easier for me to get back into a story because I'm not taking a three week hiatus between writing bursts.

So not a bad year at all!  I'm still not making millions yet but the fact that I am getting consistent royalty payments every month makes me incredibly happy.  Sure, it's sometimes only $30 but it is making the whole thing seem real to me.  Like if I just keep doing what I'm doing the $30 could slowly turn into $300.

So here's to another year of writing, meeting even more new friends and having new experiences!