The Battle for Moscow, Idaho by Edward Robertson 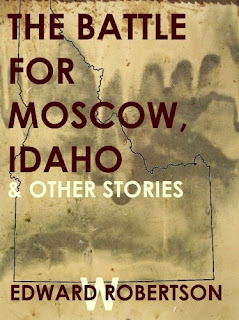 Edward's views on the short story genre:
Sometimes I write funny. Sometimes I write dark. And sometimes it's both--but whatever the case, I always try to wrap it around a muscular, adventurous plot. A writer's particular style won't always resonate with everyone. But you can at least give them a story strong enough to make it worth their time. That's what I shoot for.
Short stories can do things novels can't. Novels are great: you get to spend a lot of time with characters and worlds you can fall in love with. But short stories can push the limits. They can jump into the brain of a guy you'd hate to spend 300 pages with, but can be fascinated by over 10. And length--one of these stories is a flash piece just 500 words. Another is a Twitter-length story of a whopping 25 words. Pieces that small can make you reconsider the very way stories work. For traditional-length pieces, like the other four here, they can provide a sharp emotional stab with just a few minutes' reading.
Summary of this work:
"The Battle for Moscow, Idaho" follows a guerrilla fighter troubled with memory loss after alien-aided rebels assault his town. Appearing in a recent shared-universe anthology of steampunk-tinged alternate history, "The Inspiration of Philocrates" follows four Greek soldiers and philosophers on a mission to kidnap a key scientist from cold war rival Egypt. And in "The Mayor of Mars," two thugs steal, intimidate, and blackmail to get a crook elected to Martian office. Three other stories round out this collection of fantasy and science fiction.
Buy now:
The Battle for Moscow, Idaho on Amazon
Edward Robertson short story project