Concept behind "Celebrity Space," a short story by Alain Gomez 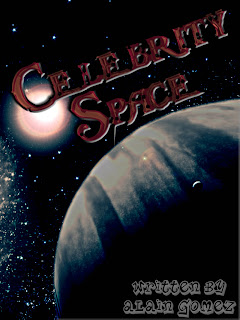 Celebrity Space is one of my more recent short stories.  It is my fledgling attempt to experiment with sci-fi.  I've been a Star Wars/Star Trek fan since I was a wee thing.  So I've always thought it would be incredibly cool to author some epic intergalactic adventure.  But those are surprisingly difficult to write!
In my first attempt to write a sci-fi story, I went all out.  I tried to create lingo, terms, alien species names, planets... the works.  This quickly becomes an exhausting task.  After embracing the fact that Rome was not going to be built in a day, I backtracked a little.  I decided to start slow and create a story that was in the not too distant future.  So I could still have most of today's terms but futuristic concepts.
I really liked the way Celebrity Space turned out.  It has a kind of fun Twilight Zone feel to it.  I'm working right now on turning it into a mini series.  I'm writing at least two more stories that will all revolve around Moonwalk Space Hotel (introduced in this story).
Celebrity Space on Amazon
Celebrity Space on B&N
alain gomez