Review of "Idea Man," a single story in a collection by Carole Fowkes 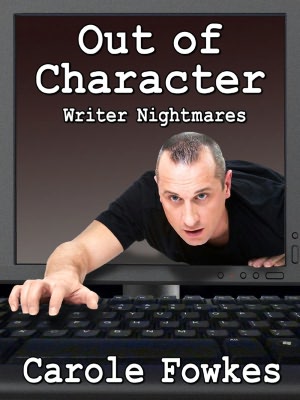 
In Out of Character, a novelist who prides herself on creating realistic characters, is writing a gritty murder mystery. Unfortunately, her story takes a more personal turn when her villain is bent on making her his next victim.

To what lengths would a highly successful novelist go to overcome her writer’s block?

In Idea Man, Lucinda’s muse materializes in his thong bathing suit and offers her a story she can’t refuse.

Review:
An amusing story about an author that has finally hit the end of her rope but help arrives just in the nick of time.  Despite the somewhat unconventional appearance of Lucinda's muse, what else is a writer to do but go along for the ride?

I found myself enjoying this story quite a bit.  Fowkes has a charming style of writing that may not make you laugh out loud but will definitely keep you smiling throughout.  I found myself getting really involved with this story as I read it, eagerly wanting to find out how the story would end (in every sense).

While the conclusion of "Idea Man" was not exactly disappointing, I found myself being highly annoyed by Lucinda's character by the end.  A muse appears before her and forces her to write a novel that is not "her genre."  She pitches a fit the entire time and, essentially, remains unchanged by the whole experience.  She's still just as close-minded at the end.  If she can't see the series potential that the muse left her with, it's certainly no coincidence then that she has writer's block.

So, as an author, I was annoyed.  As a reader, I must admit I was entertained.  Fowkes certainly has her work cut out for herself by creating a target audience of both short story readers and writers.  But I would venture to say that this story has wider appeal than that.  If you've ever suffered from writer's block (even if it was just that school essay), you'll find yourself appreciating "Idea Man."