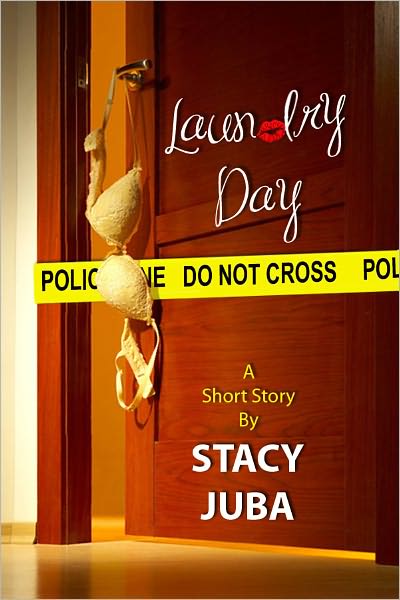 Summary:
A short story by mystery author Stacy Juba. When Gregg accidentally discovers his neighbor's lingerie collection drip-drying in her shower, he stares in fascination at a scene that looks like laundry day at the whorehouse. After his neighbor is found dead - strangled with her own fishnet stocking - the next victim might even be closer to home.

Review:
**While this review does not completely reveal the story’s ending, it does contain some spoilers.**

In “Laundry Day” a man’s chance discovery of his neighbor’s lingerie collection leads him to make some other unexpected discoveries, primarily about his relationship with his wife. He soon finds that beneath the placid surface of neighborly friendliness lies a hotbed of betrayal, lust and murder.

Here, Juba crafts a gripping tale with realistic characters and a fast paced, thrilling plot. There are few things I love more than a good murder mystery, and that is exactly what the author has created in “Laundry Day.” With its suburban setting and middle-aged characters, Juba explores the seedy underbelly of middle America without stooping to the use of trite stereotypes or descending into crass sensationalism.

In fact, I was on board the entire way, until the climax. That’s where things became dicey to me: wouldn’t a man who was happily married act first and ask questions later upon finding a man he disliked and distrusted attempting to kill his wife of 18+ years? Instead, according to Juba, he would stop and listen to the man’s accusations and weigh the pros and cons of letting his wife be murdered. To go from doting spouse to cold fish in the span of 30 seconds, based on the word of the neighborhood jerk/murderer, is a bit extreme to me.

Other than that one hiccup, “Laundry Day” is a well-written, entertaining story with a truly unexpected twist. No easy task, Juba crafts a quality, satisfying mystery in an impressively short space.