Concept behind "Director of Human Resources," a short story by Alain Gomez 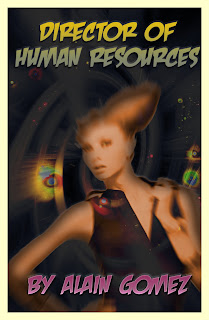 Director of Human Resources is part four of my five part Space Hotel Series.  It's also the first story in the series to be from the aliens' point of view rather than the humans'.  The purpose of this story was to finally reveal why all the human abductions and experiments were taking place in the previous stories.  Was it just a power trip?  Or is something deeper going on?
I had a lot of fun writing this particular story.  It's very rare to see the flip side of the coin in the human vs. alien fight for survival.  Aliens invade, we usually assume they're up to no good and send in Will Smith to blow up their mothership.  I didn't necessarily want to rationalize the alien's motives, but I did want to reader to think about the fact that both sides are fighting for survival.  It's almost a lose-lose situation.
Keep an eye out for part five of this series, The Hall of Immortals.
alain gomez